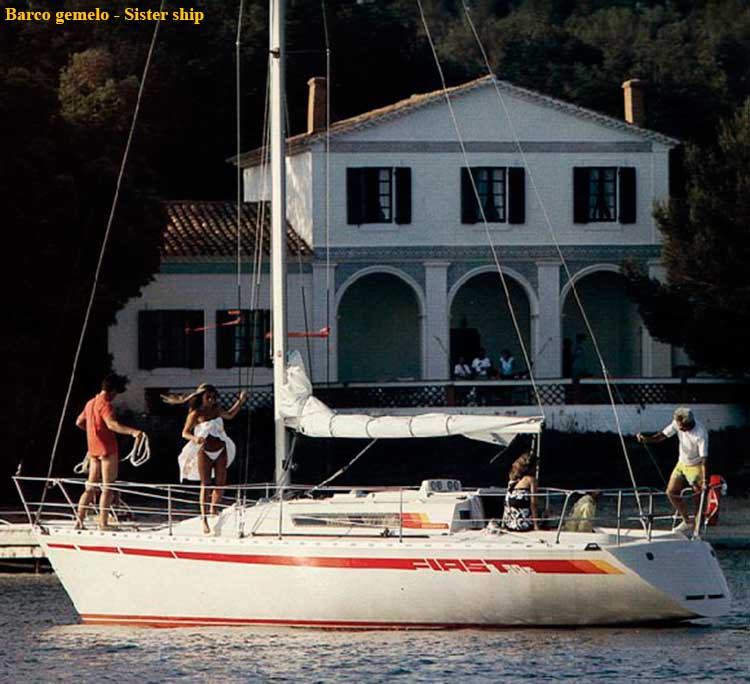 A fast cruiser racer, it was a best-seller and she is still a lovely boat. She is in very good shape and comes full of interesting extras for cruising life.

The First 30 E, designed by Jean Berret, was introduced in 1981 as a substitute of the First 30, designed by André Mauric, with which there is nothing in common. Both, however, were born in a similar way: starting from a prototipe winner in the Half Ton Cup: the “Impensable” from Mauric, in 1973, and the “Evolution”, from Berret, in 1981. The evoultion announced by the name of the prototype was amazing and still today the 30 E is a lovely cruiser with modern lines, while the Mauric design is more out-fashioned. More than 440 units were built of the 30 E during the four years it was in production (its replacement, the First 305, which made use of the same hull with a different deck was built in more than 600 units until 1987). This unit is in very good shape taking benefit from many improvements made by her owner which will give her a big lease of life: a new electric system with battery charger and inverter, LED lights, new sails, a new cooker, new upholstery, new fridge with its isolation, a new engine, etc.. The stern was modified, opening a new platform to access the sea. New lockers were thus obtained, improving the stowage. She is an excellent sailer for medium distance cruisers in safety and comfort and for club racing.