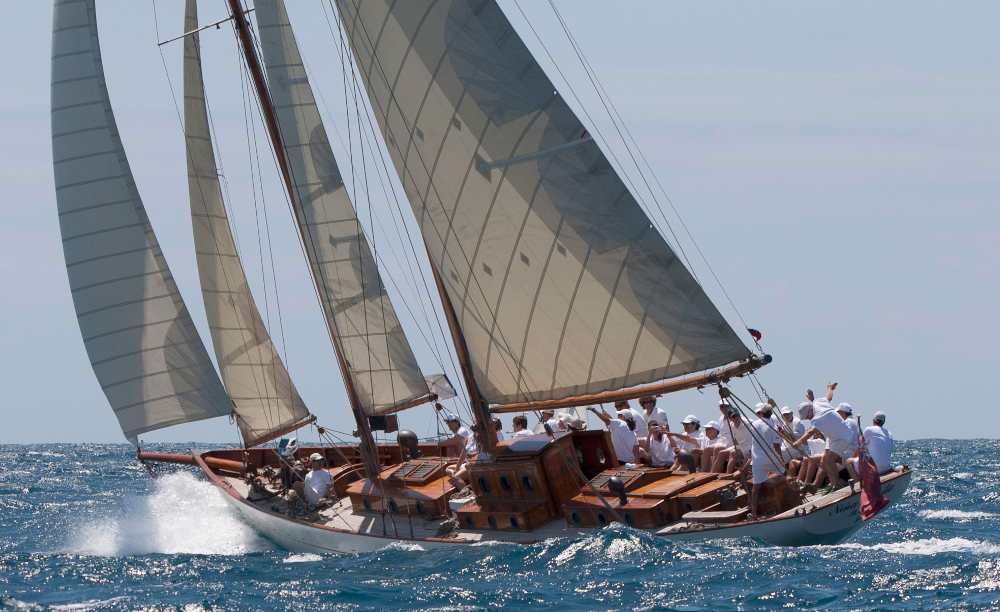 They say that Naval Engineer Vittorio Baglietto, grandson of the famous Italian Yard's founder, took inspiration from Charles Nicholson drawings, when Count Bruzzo placed an order for his next boat: a 20 m. schooner. She was to be the last out of three big sailers built by Baglietto between the Twenties and Thirties. All of them are still afloat, the two others being the Janua and the La Spina. Count Bruzzo's Schooner was called Pofi and many details on board tell us about the care he put while following the building process. The bow overhang for example, closely followed the Count's taste. He was an Eight Metre Racing passionate, while Baglietto draw for the rest a more cruising biased hull lines. The Schooner rig too was probably Bruzzo's choice. In fact it replicates the Niña's innovative shape, the formidable racer from William Starling Burgess (1928). Due to the big difference in height between the main and the stay-sail masts, the “triadic” stay, which passes on both trucks, goes straight to the bowsprit, thus allowing to hoist two different enormous sails: a genoa and the golllywobbler (a kind of Fisherman), both with the genoa tacked to the boom end. This rig became to be known as... "Two masts cutter"! We don't know if Count Bruzzo ever hoisted these powerful sails which would have given to the schooner an impressive push. Below decks, the schooner keeps still today all the feel and original taste of the era and also Count Bruzzo's touch: a large owner's state room with two chests of drawers, one with a small secreter. An owner's ensuite with bathroom, the light and ventilated saloon and particularly a small Virgin made of Murano's glass that Count Bruzzo asked be placed on a niche before the owner's bed. She still today protects the vessel and her owners. Pofi has a very tranquil cruising life, sailing around the Mediterranean waters, starting from her home port of Rapallo. Bruzzo family had a leading role in the Italian sailing sport during the years before and after World War 2. Pofi passed that difficult war period calmly moored in Rapallo, without novelties. Towards the end of the Sixties, an aging Count Bruzzo received several insistent requests to sell the schooner from Count Tagliaferri. Count Bruzzo at the end accepted to sell in 1971 and the schooner is known since as the Niña Luisita, in honor of the Count's mother and of his Argentinan wife. Counts Tagliaferri carried on with the Med cruises, now from Imperia as home port. When Niña Luisita reached 55 years, in 1987, they sent her to Baglietto Yard for a deep general refit. At the Yard some old workers did recognize the old Pofi and her particular building! Then she received her third teak deck, a new main mast as well as a new halyard winch to easy the hauling of the main and some improvement to the interior electric lights. For the rest, she continued to be as when she was born. This is the reason why the Niña Luisita occupies a honor place among the classic races fleet that in the meantime spread along the Mediterranean Sea. In 2006 and 2007 a new refit work saw the engine replacement, mounting a gen set, and new electric wire system and panel, under the supervision of famous Naval Architect Franco Giorgetti. After some difficulties, today the Niña Luisita is in need of important work. Some planks of the hull needs urgent replacement, as the sternpost and keel bolts. A new stay sail mast should be built, while the main-mast needs to be disembarked and revarnished. The Sika on deck needs replacement and roofs and deck a new varnishing cycle. Engine and generator should be disembarked and deeply serviced. Niña Luisita needs a new owner engaged in keeping her originality knowing the value of a vessel that after 90 years had just three owners and all of them kept her in the precise conditions than when she was built.