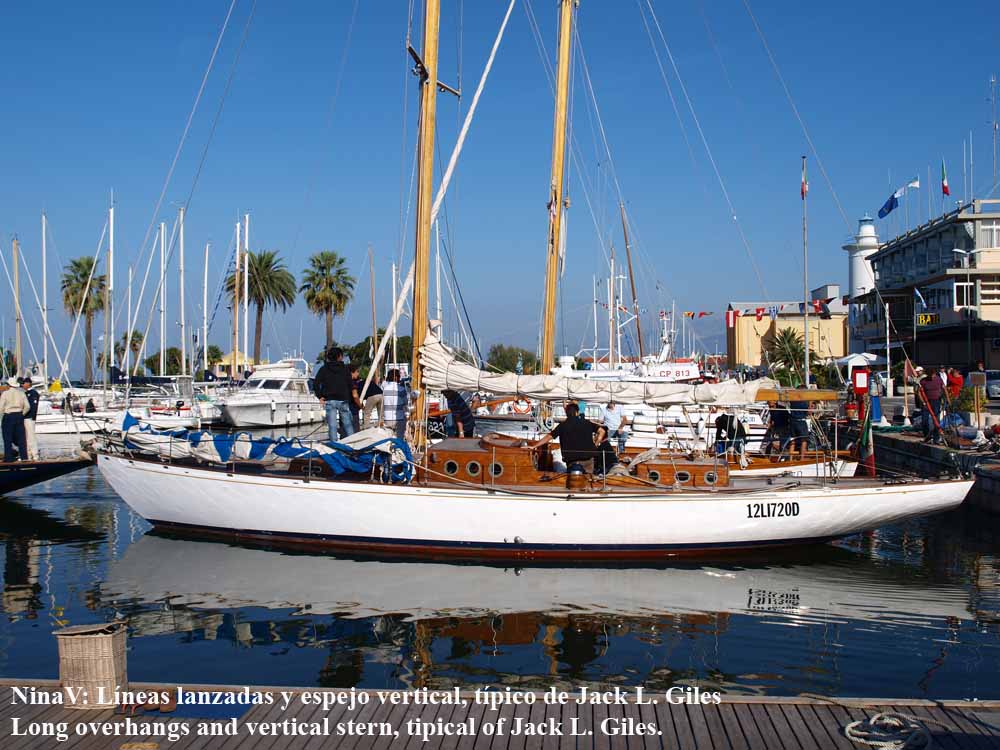 A very famous yacht, designed by a great Architect, built by a great Yard and with a fantastic sportive history. She is in very original shape.

When Nina V was launched, the famous British magazine said that this “yacht is particularly beautifully built by the Beltrami yard, the standard of workmanship being superb. Of an order we used to associate with Fife of Fairlie...”. Nothing less! Engineer Beltrami started to build on his own in 1917 and he continued his work during exactly 50 years, until his death in 1967. He always kept his quality exigence to a very high degree. At the beginning of the Fifties the goal of any racing boat owner in the Mediterranean was to beat Jack Laurent Giles designed Miranda IV. The Nina V built up an everlasting fame of being a perfect vessel for both light and heavy winds. Her first race, between Genoa and Sanremo, was won in light weather against the Miranda IV herself. Three years later, in 1957, Nina V won the Giraglia race, then at the top of the Mediterranean racing calendar, in an awful weather that played havoc on the fleet. Her characteristic deck lay-out, with a central cockpit and two cabins on the extreme corners was innovative when she first appeared. This lay-out offers several advantages on a racing boat: it tends to concentrate weight in the middle, also manoeuvres are concentrated there, two cabins very far away each from the other are obtained (thought in Nina V the forward ambient is more a classic crews quarter) and the quarter berths are close to the helmsman's station. Nina's V hull lines are less extreme than those of Miranda IV and Cypsela's herself her Spanish contemporary, both showing a separate rudder and, especially the second, a light displacement. Thanks to them, nowadays the Nina V is a perfect vessel for family cruising, fast and very comfortable and also a good weapon to frighten everyone in the classic races of the Mediterranean Circuit. She is structurally sound. In 2007 a few planks were replaced and a thermography was carried out that confirmed the good shape of her hull. She needs varnishing and painting and perhaps a deep service to the engine.