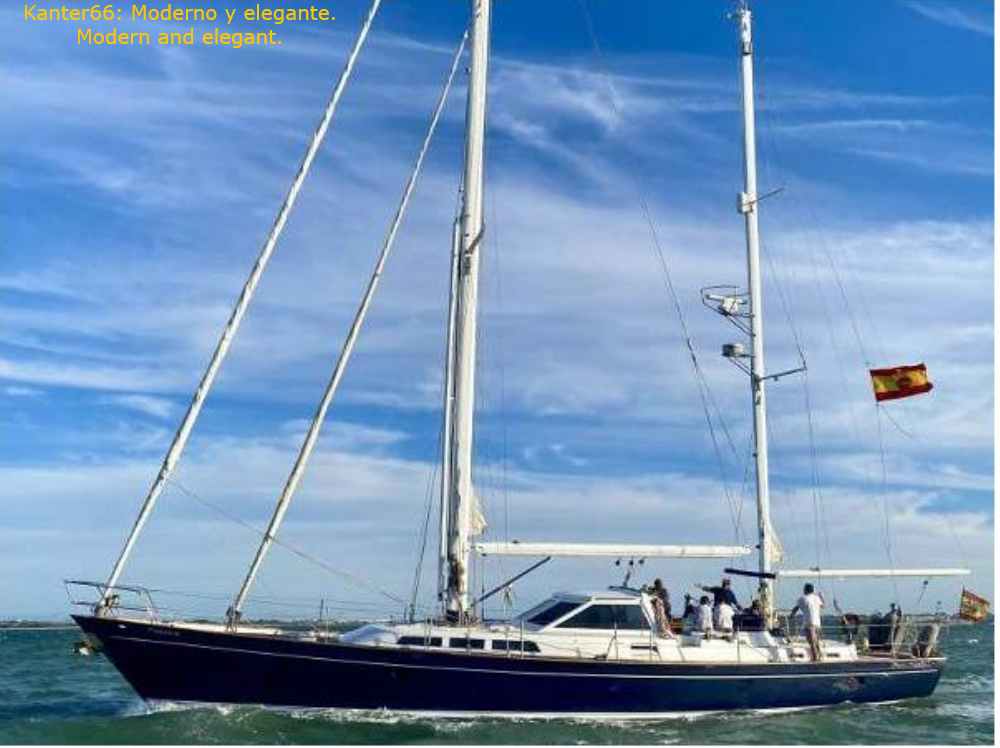 A no nonsense cruiser of amazing building quality. Fast, sturdy, safe and elegant. She rounds up the best items for long stays on board.

In 1962 Manfred Kanter moved with his wife from Hanover, in Germany to Canada. Thought he had made some boat building studies in Hanover, his initial activity there was in other fields. Manfred owned a 6m Int in which he raced with success. At the beginning of the Seventies, using his own knowledge he built aboat to go cruising with his family. Thus they made a long trip to the Caribbean and all over Europe with many stopovers. That life experience on board a vessel nurtured in Manfred a knowledge about cruising that he put to use when coming back in 1977 on his next activity: Kanter Marine for the building of stainless steel cruising yachts. His meticulous care in building and his finishing perfection raised the Company's success. Even if the production did not reach big numbers, it did reach big dimensions and only ten years later, Manfred was compelled to look for bigger premises where to continue building yachts. Since then, Kanter Marine is located in St.Thomas, Ontario and today they continue to produce cruising yachts and professional boats, mainly aluminium built. Manfred Jr. And his brother Christopher took over from their father and following his wake they only dedicate to the boat building without any further activity. One of their external collaborators, Naval Architect Dieter Empacher curiosly enough has a similar personal history to Manfred's Sr. he too was a German, grown up on a boatbuilders family, he migrated to the USA in 1963, looking for a job and there he remained. For quite twenty years he worked for Ted Hood's office, collaborating to the 12m Int Independence design, or on the various Hood's Robin and many other design for different yards. Then he created his own office, in 1982. Manfred Kanter and Dieter Empacher collaborate since very closely and one of their Most impressive creations is the Kanter 65, a no nonsense blue water cruiser with no restrictions of use. "A good cruiser, said Manfred Kanter, must be fast enough to outrun a storm and strong enough to sail on it". The Kanter 65 is a fine hulled ketch, with a good turn of speed. Her sail area is large, without any complex and being divided in two high aspect ratio masts it's very efficient even up-wind and easy to handle by a short crew thanks to a powerful deck hardware and to the fairly reduced area of each sail. The traditional American lay-out with a central cockpit, well protected by an elegant hard-top, puts the boats handling on the middle, near the boats barycentre, thus efficiently reducing the hard movements feeling in bad weather. The "Rebel Jo", today called "Buena Esperanza" (Spanish for Good Hope) is a most customized Kanter 65, either on her dimensions, she is a 66 footer, or in the building material, with a stainless steel hull and deck and aluminium coach-roof. The marked deck sheer ends up on a high and powerful bow with double bow rollers for anchor work. Aft on the stern che has an ample platform for access from the quay that is easily convertible to a sea bathing platform. At each end there are good stowage facilities. Below decks this vessel is luxuriously finished in varnished teak wood with a modern and everlasting style, not affected by temporary fashion. Each cabin is roomy and full of stowage places with an ensuite. On those forward there is a common shower room, a clever solution in terms of space use and very elegant with its radiused bulk-heads. Every detail sparkles with the care for luxurious finishes, as for example each window or hatch is rounded up by a wooden frame of teak topped by a cord outlining the frame. Or those radiused corners on each bulk-head, locker or table. Even the space lay-out, with so many different places where to indulge reading, pondering or listening music, favours good living on board. The electronics set is exhuberant and though not the last cry it's useful and it works perfectly. The "Buena Espernza" thus is in very good conditions of maintenance and she only needs a paint cycle on deck and some repair to the Sikaflex joints on the teak. In fact, she is ready to sail anywhere at any moment.