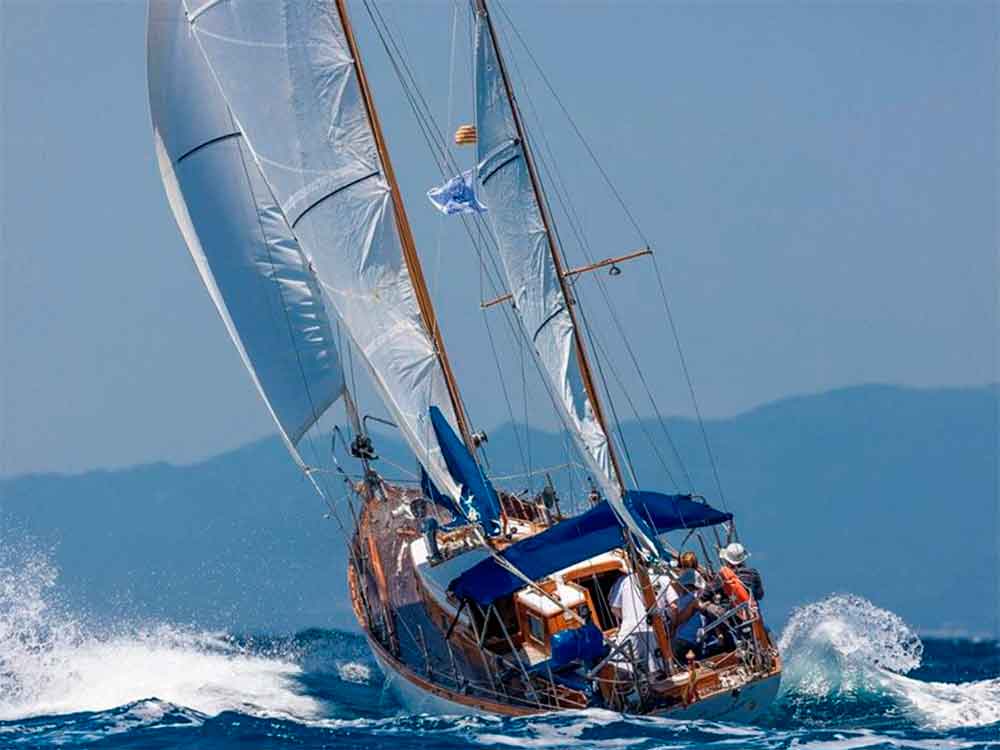 There are wooden boats proud to look as fibreglass made. This magnific classic GRP goes in the opposite direction! She has been restored in all the structural points and is just in need of aesthetic work.

Philip Rhodes was a nautical pioneer all along his life. He has been master of great Naval Architects: Olin Stephens and Bill Trip, among many other, worked with him. Rhodes was soon interested in fibreglass construction and they say that he was used to design only two basic models from which he made every kind of variation: one was long and narrow, the other flat and wide. Starting from these two differet conceptions he made always real racing winners and comfortable cruisers. One of the first series that can be considered industrial products was his creature: precisely the Reliant/Offshore series, built by Cheoy Lee in Hong Kong during the Sixties and Seventies. Between 1964 and 1976 some 160 units were built. This Yard has been always recognised for its high quality craftmanship. Either the teak used on his boats as the fiberglass have always proportioned a fine product. No one would say that the Reliant/Offshore class are fiberglass boats: the deck and the coach-roof are fully covered by high quality wood without any fiberglass glimmer left. The masts too are of high quality Pine wood and keep well the time passing by. There are very few differences between the Reliants and the Offshores, that are basically the same model with small modifications made just to avoid paying the Royalties due to the Architect himself. This provoked a big scandal at the moment... the first of many others to come! The stern shape, that of the keel with the ballast bolted on reliants and encapsulated in the fiberglass on the Offshores, the deck and interior lay-out made differences between the models, but Cheoy Lee did play with these differences all along the production of the models, and many boats of one serie spot features of the other. The Pandia is a tipical Offshore 40. Her present owner found her abandoned and has accomplished a deep restoration program, touching every structural aspect. It remains the aesthetic work to complete the work but this vessel is already able to sail away in safety.