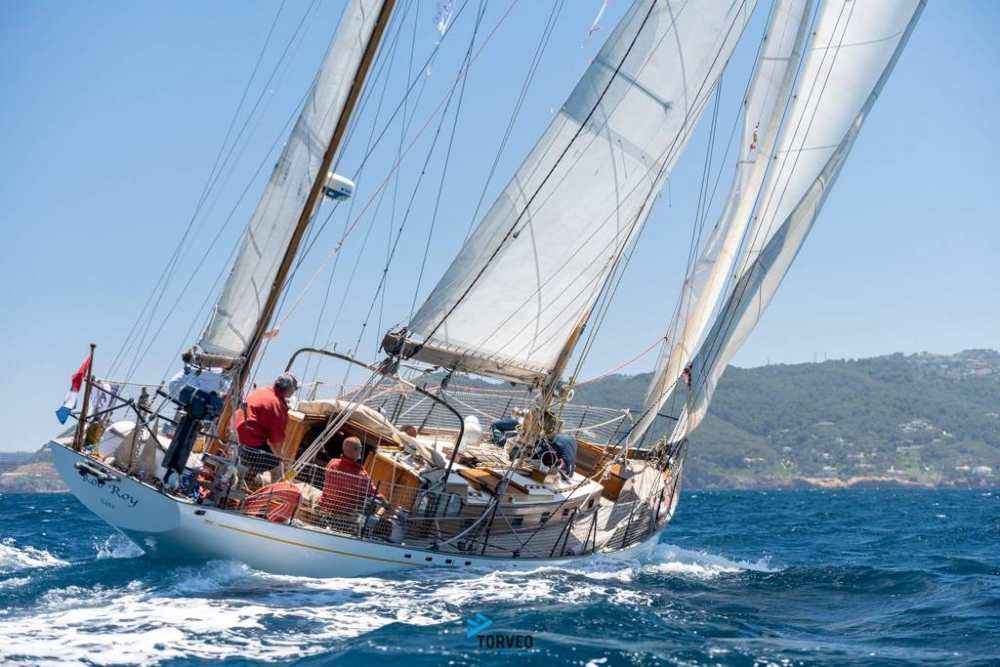 At the end of the II World War, Arthur Cecil Robb, a New Zealander living in the UK, opened his own Naval architecture business in London thus starting a brilliant professional career. He very soon raised a fame of elegance and effciency on his designs. Regarding the elegance, Robb very often favoured important over-hangs and a marked sweet sheer for his designs. Regarding the effciency, the Mokoia of 1948, his frist important design, arrived second at the Kristiansand race, in Norway, having been launched just days before the race, without the time to check the new sails and loaded with stuff for long distance cruising. The Kahurangi, of 1953, won every kind of race in New Zealand, to the point that a street in Auckland was dedicated to this vessel. In those times of post-war and with the economics still recovering these boats stand out for her dimensions and their achievements. The collaboration between an experienced sailor as American August Boorstein was, a clever Designer as Arthur Robb was and a great builder, as was the Yard founded by Herbert Woods in the Twenties in the Norfolk Broads, could only produce a great yacht and Rob Roy is for some historians one of the best boats designed by the New Zealander. As a son of that Country, Robb had already good experience of lifting keels, but it was only when asked to design the Robb Roy that he could apply in facts his know-how. When in 1966 a Florida based broker offered her in the second hand market for the first time, he claimed that she had costed 230.000 $ to build, a statement of her hig quality construction. In the Rob Roy A. Robb repeated many of his favourite features as the three radiused windows of the dog-house, already shown on the two 10,5 Int. CR of his design built in 1954 by Gino D'Este in Venice (the Mila II and the Paola). He will repeat the same feature also in the Mistress Quickly (today Nerissa, another 10,5 Int. CR) built ten years later by Beltrami, in Genoa. Other issues favoured by Robb and found on board Rob Roy are the butterfly hatches that at the time were rapidly becoming old style, but that give plenty of light and ventilation with only a small reduction in the strenght of the structure. The navigation room, placed at the companion-way on a elevated position is another typical Robb feature to keep better communication with the crew and to reduce the interior's slope with the outside, as there are two different levels. As the folding chart table is, the only allowance of the Designer in the search for ample spaces below decks. Or the gorgeous soles of massive wood or the then state-of-the-art laminated beams. In short, a real summary of ideas and woodwork of exceptional quality. The long over-hangs too, that give to the vessel her classic feel, were a favourite of Arthur Robb, a man that carried on drawing wooden boats even when the fibreglass was taking over. Those over hangs together with the full forward lines of the hull which have not any hollow on them as some American designs already showed, give buoyancy to the boat and a sweet motion through the waves. Her beam, just a bit ampler than a British design of fixed keel, but less than a lifting keel American design of similar dimensions, boosts her up-wind performances. The lifting keel became popular again in the Fifties with the victories of the Finisterre (launched in 1954, to a design of Olin Stephens). Robb had that in mind when designing this boat for an American racing sailor who was about to challenge the Finisterre herself. In fact the Rob Roy, with a draft between 1,80 and 3,05 m., had an effective racing career against the best racing boats of those days, that lasted well into the Eighties. Afterwards, she started a tranquil blue water cruising life that took her from the USA to the Baltic and North Seas. Now she sails in the Mediterranean. Barcos Singulares sold her to her present owner years ago. He restored her to the very good conditions she is today, with new masts and standing rigging, new sails an many more small details. She is in very good shape and originality, something very important for a classic boat. She only needs a new varnishing cycle for the coach-roof.